Fodder is making a come back but is it really a wise time investment and does it really save money on feed? 2 pounds of seed grows to 12 pounds of fodder, but did you know that it actually LOSES the most important aspect that animals need in feed? Find out why and how… 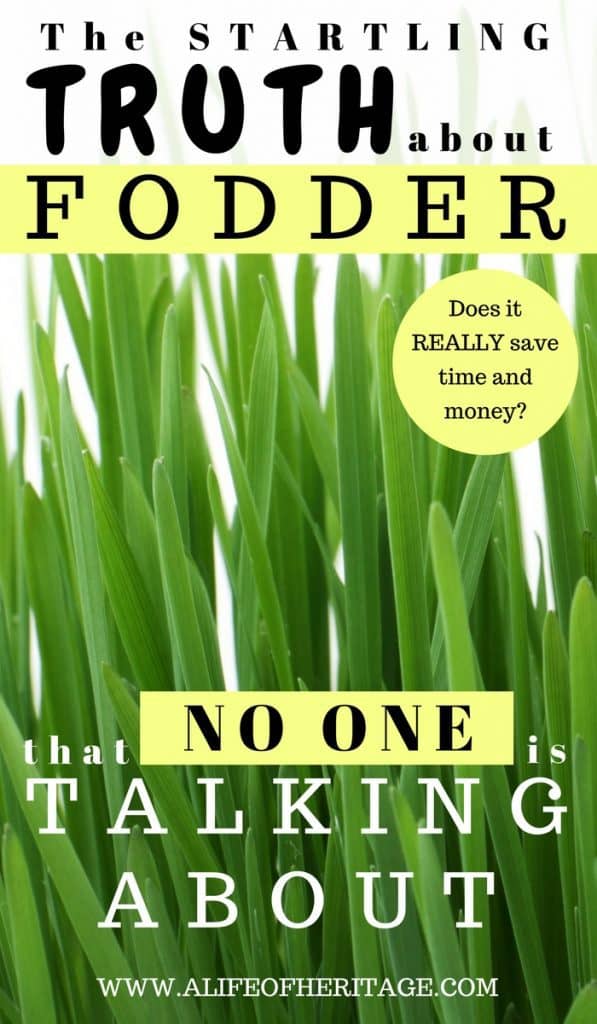 I was going to grow fodder for my animals. (Do you hear the stubbornness behind that statement?)

I had read all the articles and I was ready.

I had even made my fodder shelving and bought these awesome durable, heavy seedling trays. I was ready. 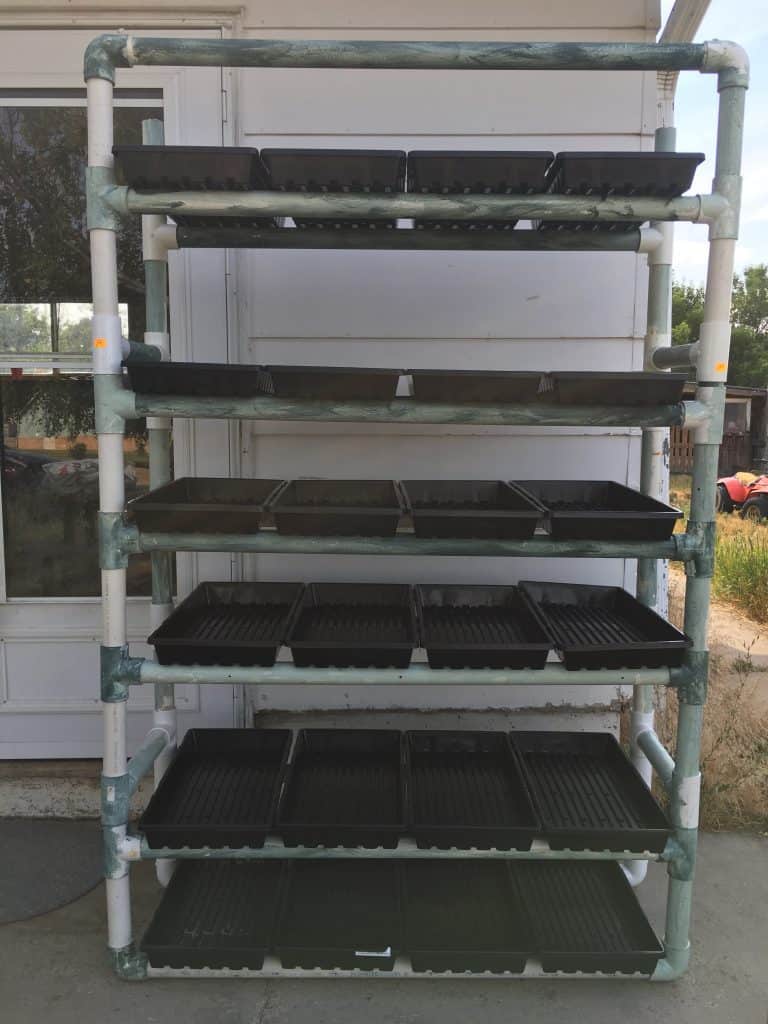 This was my setup ↑

And then I decided to do a bit more research. I’m really good at jumping in and just doing something and then later wondering what in the world I was thinking. Are you like me in that regard? I hope not!

If you prefer to watch a video about this information instead of reading, click the video below!

Fodder: The Startling Truth No One is Talking About
Watch this video on YouTube.

But I knew that there were three very specific things that had to happen if I was going to grow fodder for my animals:

In other words? It had to be worth it.

Worth the time investment and not be a detriment to our pocketbook. If you are already raising livestock, you already know this: animals are not cheap. And at every turn, we are looking for ways to raise healthy animals and save some money.

Who did I turn to for my information? I knew that I had to go deeper than the average blog post. I wanted to know really what was going on with feeding fodder and one of my first goals was to be able to create a calculator for myself (and you) to be able to use to calculate how much grain in pounds it would take to grow enough fodder in weight for the specific amount of animals that were owned.

So I reached out to Montana State University and found a very helpful and informative professor under the title: Extension Forage Specialist, Department of Animal and Range Sciences.

And I asked a lot of questions.

But first, let’s begin with what these words even mean.

The definition of fodder according to Merriam Webster is this: “something fed to domestic animals, especially: coarse food for cattle, horses, goats or sheep.”

More recently there has been a resurgence of interest in sprouted grains, also now known as fodder. Usually, the grains are sprouted to about 6 inches tall, which will take approximately 6-10 days.

The week-old sprouts are fed to the animal in its entirety. Meaning, the leaves (grass), roots, and any remaining seeds that didn’t sprout are all fed to the animal and eaten. No dirt is involved. In this quick turnover of seed to grass, there is no need for dirt and the roots become a heavy mass that is rolled up and toted out to the animals. 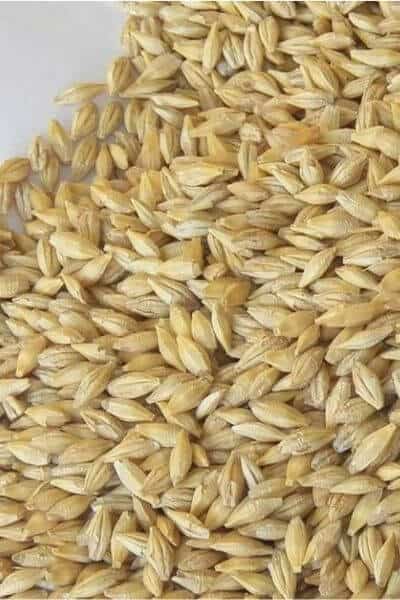 How to Grow Fodder

Generally speaking, it is fairly easy to grow fodder. One article says that it is “practically effortless” to grow sprouted grains.

As a quick overview, here are the steps that people take to grow fodder to 6 inches:

Fodder systems can be as easy as setting a small container on the windowsill and they can also be set up to be completely automated after the seeds are in the trays. Some systems can be connected to a water source where the water is reused and pumped to rinse the seeds throughout the day automatically, which helps lessen the time spent manually rinsing several times a day.

Any article about sprouted fodder will give a very impressive list of benefits. And who wouldn’t want these benefits for their animals?

This list is found on many websites touting the benefits of growing sprouted seeds:

But this impressive list isn’t the beginning or end of this discussion. There’s more. A lot more. 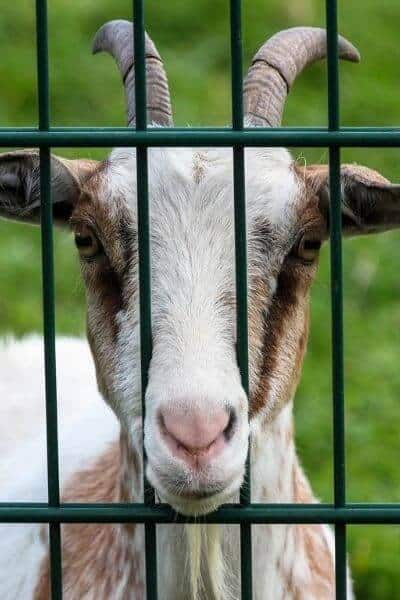 The True cost of Sprouted Grains

In my research, I found that when talking to people who know what they are talking about in regards to animal nutrition, a lot of the wording and technical aspects of the conversation can quickly go over my head.

This subject about nutrition and the bioavailability of starches, sugars, and the makeup of grains, and hay can get deep and complicated very quickly. Not only can grains and grasses grown in different pastures and parts of the country have completely different nutritional content, but when, where, and how they were harvested also affects the outcome of the feed as well. And all grains are not equal either. Depending on dirt health, harvesting, age, and how long they were sprouted all change the outcome of what ends up being fed to an animal.

So in short, to say that my hay quality and nutritional makeup are exactly equal to your hay is impossible. This would also mean that my barley grain and the sprouts I produce, could not be said to be equal (or better or worse) without testing the specific grains used and the final fodder product.

Is this getting heavy? I hope not!

Because this is where the whole fodder conversation gets blown out of the water.

The Truth About Fodder

If you’ve done any research on fodder, one key phrase may have caught your attention: “1 pound of grain turns into 6 pounds of fodder!”

And what did you think? Like me possibly? “Wow! That’s amazing! How else can you multiply feed like that??”

But it’s a very deceiving claim.

Why? Because of the dry matter.

If you have lugged around a mat of fodder, you know how heavy it is! Incredibly heavy! And all that weight is moisture.

In fact, fodder is made up of about 80%+ moisture content compared to the 15% moisture found in hay.

This is the reality of fodder:

So what has the dry weight of the fodder become at this point?

Wait, what?? The fodder has actually LOST dry matter. For every 2 pounds of starting seed, it will, in fact, have lost almost a pound of dry matter!

And why does this matter again? Because animals are fed on a dry weight basis.

And when you are crunching numbers as I do continually, losing feed is not an option and if it happens, it is very costly and can be detrimental to the bottom line.

But how does this happen? What is going on inside the seed to lose dry matter?

The Reason Behind the Loss of Dry Matter in Fodder

When a seed is growing into a plant, it uses up its stored carbohydrates. This stored starch is used up during the first week of life. Usually, at this point photosynthesis takes over, roots develop and the plant can begin to uptake minerals. But in the case of hydroponic systems, dry matter and carbon are being used up during the 10-14 days of growth, which leads to the loss of dry matter.

So, the longer the sprouts are growing to reach the desired “6 inches of growth”, the more dry matter they are losing.

What About the Previously Mentioned Nutritional Quality Improvements?

Sadly (because I really like the idea of growing fodder) there isn’t any valid research backing up the nutritional quality improvements.

Now do animals usually love the fodder? Oh yes, they do! Chickens might knock you down to get to their fodder treats! The fresh, moisture-filled product is very palatable and pleasing to most animals.

But the reality is that the research done on the nutrition of fodder shows that not only is there a loss of dry matter but the “true protein decreased, and the non-fiber carbohydrate, metabolic energy, and in-vitro gas production decreased in sprouted barley compared with the raw seed.” ~Source

What does this mean for the fodder product? It has lost energy and has actually lost feed value when it is compared to the original seeds themselves. Those barley seeds? Their feed value is at least as good, if not superior, to the fodder.

Another factor that I hadn’t considered was this: “Thomas and Reddy (1962, Michigan State University) compared 8-day sprouted oats against whole or crimped oat grain when fed to dairy heifers. Digestibility of dry matter, protein, and energy were significantly higher on the processed grain diet than on sprouted oat diet. Daily urine production increased from 4 liters on the control diet to 13 liters per day on the sprouted oats diet. Bedding needs would increase significantly to keep cattle clean and dry on the sprouted oat diet.” ~Source (Mentioned way down in the comments) 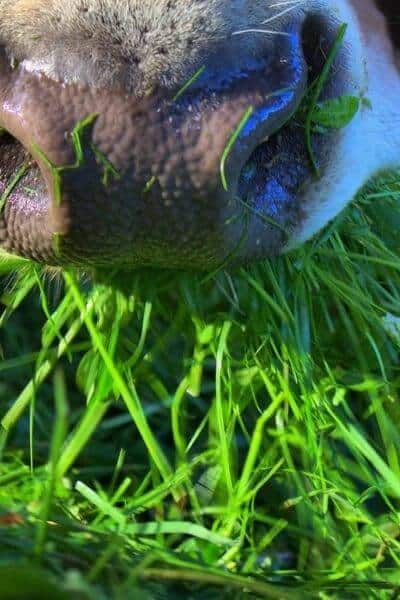 When Does It Make Sense to Sprout Grains?

Does this mean that it never makes sense to grow fodder? No, not necessarily.

Here are a few times when it makes sense to grow fodder:

If you fall into one of those categories, great! But don’t forget to count the cost first. This will not be something that will save time, money, or feed.

What Are Some Cons and Challenges of Growing Fodder?

This was another important factor that I had to consider, despite my adamant desire to grow fodder for my animals. I wasn’t going to just grow a batch here and there of fodder. My original plan was to use fodder to supplement much of the hay we had to harvest and stack each year for my animals.

But I had to ask the hard questions.  How much time would I have to devote a day to growing fodder? What are some of the challenges that come up and cause problems?

Are you like me? Lots of animals, young kids, a busy life…

I am looking for ways to simplify and improve. So what challenges come up for those growing fodder?

But where there is a will, there is a way. Sometimes challenges can be mastered and if your heart won’t be content until fodder is made available for your animals, don’t let these reasons stop you!

The conclusion of Growing Fodder for Livestock

There is absolutely nothing wrong with growing fodder for your animals. Many people have jumped on the idea of growing sprouted grains. It feels like something you “should” do, right?

But I gotta tell you, I want fodder to be all that and a slice of bread, I really do. But the facts cannot be overlooked just because the internet says so in a handful of places or because I want them to.

Fodder has made a resurgence but it’s worth looking into the facts a little more deeply, isn’t it?

The grass just may not be greener on the other side after all.

If you would like further reading, this is an awesome source and the one article that got me to really start thinking about the reality of fodder: Hydroponic Forage

This article was written in 2013 and talks about the experience of several people using fodder. It would be interesting to hear the update, the verdict was still out on their profitability and it’s effectiveness: A Revolution in Animal Feed?

« Basic Goat Health Information
How To Take a Pallet Apart »